Every once in a while, if you’re lucky, you meet someone extraordinary. Our friend, the late R.W. “Toby” Tyler, fit that category. A prolific artist, he may not have been well known in New York or Boston but here in Homer, Alaska, everybody knew his name. More than a few people have stories to tell, as in “He was my eighth grade math teacher” or “I used to stop at his Pioneer Avenue gallery on my way home from school” or “I worked on a Coastal Studies trail project with him.” To honor his life and his legacy, Ptarmigan Arts gallery will host a final solo show of his artwork titled “Remembering Toby Tyler” May 5 to 30, with a First Friday reception from 5 to 7 p.m. on Friday, May 5. 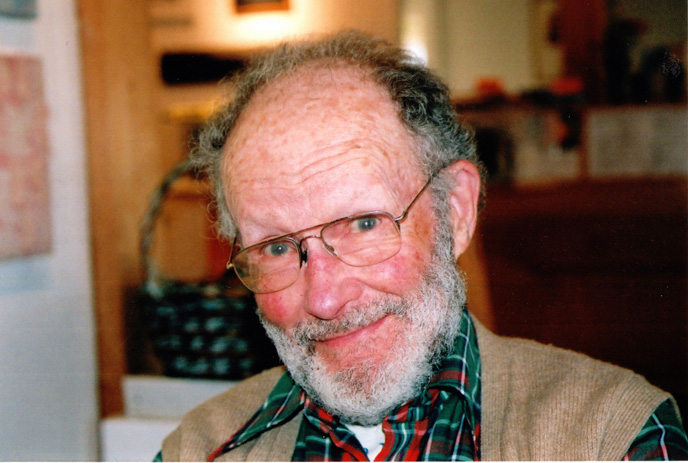 This is the story of how that show came to be.

Toby was a quiet, unassuming little guy blessed with the most generous and giving spirit you can imagine. Fiercely independent and always active, he ran circles around folks half his age. In a cruel twist of fate, a major stroke in December 2014 turned his world upside down and landed him in assisted living, where he remained for the next two years.

Helped by friends who set up studio space at the Center for Alaskan Coastal Studies and provided weekly transportation, Toby was able to return to painting in the fall of 2015. Although his perception and fine motor skills were affected by the stroke, his new paintings were nevertheless instantly recognizable. Is that Red Mountain? And is that the beach at Anchor Point? Of course. 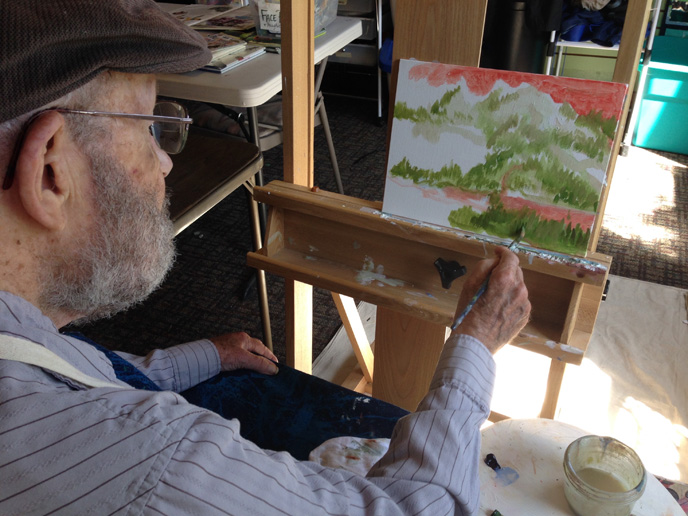 Just after his 89th birthday, and only a few months after the dust had settled from his March and April 2016 show titled “Surprises from Toby’s Attic,” I pulled up a chair and sprang something on him. “We had so much fun with your show, how about we do another one? Like next May, for Shorebird Festival month? We could frame up all your new paintings and some of your watercolors, too.”

The response was typically Toby: “Oh, nobody would want to see those things.” Sensing that he might be persuadable, I suggested that we give it some thought and talk about it later.

The very next night, at a gallery meeting, I overheard him telling people about his May show. So much for thinking things over. Later, as we drove up to the door at assisted living, his parting words were, “We have a show to do. We’d better get busy.” All righty.

Toby was a Man with a Plan. He loved the element of surprise. His plan for the show was simple. He would shave off his beard, which had been his trademark for decades. “And then I’ll walk in at the show, and nobody will recognize me.”

Sadly, it was not to be. Toby died three days before Christmas. His death was not unexpected, and in many ways it was a blessing for him, but the loss was profound. There isn’t an arts, conservation, or environmental education cause in Homer that has not been the beneficiary of Toby’s generosity. He was always the first to donate a painting to Ptarmigan Arts’ scholarship fund. The Center for Alaskan Coastal Studies and Kachemak Heritage Land Trust have been major recipients of Toby’s support and the gift of his time and talents.

What to do? How could we honor our friend in a way that fit his simple lifestyle and his expressed wishes? How best to give Toby’s friends and the community an opportunity to remember him in a meaningful way? Should we go ahead with the show? Strangely enough, I had struggled for months to come up with a name for his show. I figured that “To Be Determined” wouldn’t cut it. And then I knew. The show would be named “Remembering Toby Tyler.”

After a few months of uncertainty and a lot of non-stop logistical work by Toby’s friends at Kachemak Heritage Land Trust, we’re in green light mode for the show. The paintings have been inventoried, wrapped, unwrapped, photographed, re-inventoried, re-wrapped, and moved from Point A to Point B and back. And soon they’ll be moved again. But the finishing touches are in the works, and I think Toby would approve.

“Remembering Toby Tyler” will be on display May 5 to 30. The show features a mix of his framed original “last works” oil paintings, original watercolors, cards, and prints. Smaller items may be taken at the time of purchase, with larger works available for pickup on May 30.

So if you are in town on Friday, May 5, stop by Ptarmigan Arts gallery from 5 to 7 for a special First Friday reception. Lift a glass (of punch, of course) or dig into a piece of Toby’s favorite carrot cake from Two Sisters Bakery. Grab a pen and jot your recollections about Toby in the remembrance book, which we will give to his family. Share a laugh or two.

His chair will be empty, but I’m more than certain that his spirit will be with us.

Rest in peace, my friend.